A big part of the Finca Alta Cocina cooking holiday is wrapped up in experiencing Andalucia through all the senses.

The Southern region of Spain is made up of a collection of picturesque white villages, historic cultural influences, generous tapas dishes and – more often than not – beautiful weather too.

The Finca Alta Cocina cooking course submerges you in Andalucian culture, both in and out of the kitchen.

To whet your appetite, here are some brief snapshots of the towns and cities nearby.

The local town which is a mere ten minutes drive from the Finca, through the stunning Sierra de Grazalema mountains.

Algodonales is a classic Andalucian town with all the charm of rural life. The main square is located underneath a traditional Iglesia (church) and is filled with locals of all ages. On the weekends, the bars, restaurants and cafes are full of people dining out on succulent solomillo iberico (iberian pork) and other tapas dishes.

There’s also a number of tourists who venture into town from the local paragliding schools. You can often see them in the sky from the Finca’s garden.

It’s a quiet picturesque location, but when it’s time for a carnival or a special occasion, the whole town gets involved!

The bustling market which we visit on the very first day of the cooking holiday.

Cádiz is said to be the oldest city in Spain and one of the oldest continually populated in the whole of Europe.

The winding streets, Catedral and city watchtowers make for an amazing stroll. Also, the Mercado Central de Abastos (the local food market) is full of sights, sounds and flavours of Cádiz – which you will get to know throughout the trip.

Pictured above is friendly fishmonger Paco, preparing the monkfish for one of our seafood dishes!

A beautiful white village located under the rocky peninsula Peñon Grande, Grazalema is another part of Andalucia which remains an irresistible stop-off for tourists.

Another stop-off point on the first day of our trip. We head to a sherry bodega and get more acquainted with this city´s finest export.

Jerez de la Frontera is the centre of sherry making tradition, with very many bodegas (wineries) located right in the centre of town.
Here you can also see a horse show and a carriage museum at the The Royal School of Equestrian Art.
Jerez is also a city where flamenco singing begun. Many restaurants have live performances of flamenco music and dance.

Said to be one of the region’s most romantic locations, Ronda lends itself to some jaw-dropping views.

Along with oranges growing in the street and the delicious food served – what makes Ronda so special is its location, lurching over the edge of the El Tajo gorge which drops 100 metres below.

The Puente Nuevo bridge crosses over the canyon and the view has to be seen to be believed.

The capital city of Andalucia – located an hour away from Algodonales.

Sevilla encapsulates all the best aspects of the region, with a commitment to tradition alongside modern developments like the Metropol Parasol, the world’s largest wooden structure.

From the largest Gothic cathedral in the world, to the Real Alcazar gardens, to the vast Plaza de España square (picture above) – you will never be short of things to see in Sevilla.

A spot made for postcard views and one which you can see on the drive into our local town.

Zahara de la Sierra is another white village which sits underneath a castle built into the rock above it and a turquoise reservoir below.

There’s a main square, tourist offices and a mirador (tower) which provides some fantastic views across the local countryside. Hermosa!

For more information on the towns and cities of the region, visit andalucia.com 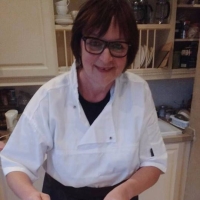 Celebrating food and all the joy that comes from creating and eating it.

Baking and cooking recipes for everyone

The Art and Craft of Blogging

The latest news on WordPress.com and the WordPress community.